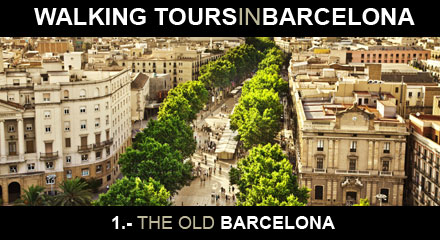 This is the first in a series of Barcelona walking tours that we will be posting on our blog. Here you can download the walking tour map.

The tour should take about three hours – or the whole day, if you wish to spend time visiting the museums, churches and shops selling antiques and many other items that you find along the way.

This tour takes in the city’s Gothic Quarter, Roman Barcelona and the old Call (Jewish Quarter).

The starting point of the tour is the underground Tourist Information Office at the southern end of the Plaza de Cataluña, which is the third largest square in Spain and provides the link between old Barcelona and the more modern parts of the city. Here, you can obtain as much information as you wish before setting off.

The tour starts with a stroll down Las Ramblas, the city’s most emblematic street, which connects the Plaza de Cataluña with the seafront. On the right-hand side of the central promenade, as you start to walk down, is the Fuente de Canaletas, the place where FC Barcelona football fans, known as “culés”, celebrate their victories. It is said that whoever drinks from this fountain will always return to Barcelona.

Continuing down this avenue, which is always lively and full of people, human statues, flower stalls, newspaper stands and bar terraces, you reach the Calle Portaferrissa (the second street on your left). After entering this shopping street, turn right into Calle de Petritxol. 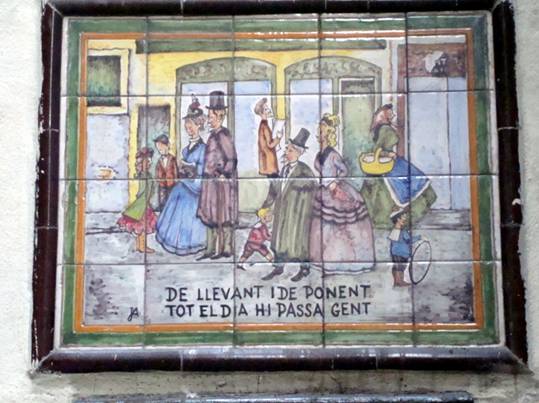 Calle de Petritxol is one of the most charming shopping streets in the city. Narrow and secluded, it is full of shops and showrooms specialising in arts and crafts and cafés, such as Granja Dulcinea and Granja La Pallaresa, where you can try the very best hot chocolate in the city. It is a great place to sit (if you can find a seat, as it is always busy) and order a “suizo” (a cup of rich hot chocolate), a plate of cream or “mató” (Catalonian fresh cheese) or any other sweet speciality of the house.

Calle Petritxol leads into the Plaza del Pi, which, as well as the adjoining square, Sant Josep Oriol, is usually very busy with café terraces that invite you to enjoy a sit-down and watch people stroll by in a serene and relaxed atmosphere. Outside the Church of Santa Maria del Pi, artists usually exhibit their work, and small markets set up to sell arts and craft products at the weekend. 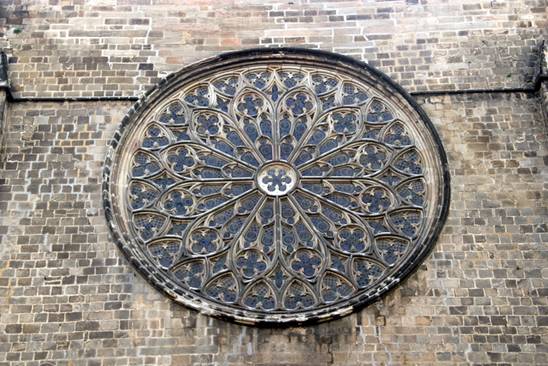 The Church of Santa Maria del Pi, with its large rose window, deserves a special mention. It was built in the 14th century in the Catalonian Gothic style. After rebuilding work following a fire, it became more purist in style; its main façade became Gothic, and its rear façade neo-Gothic.

Continue the walking tour along Calle de la Palla, where, as well as finding an interesting second-hand bookshop, art galleries and antique shops, you can also see the remains of the old Roman wall. 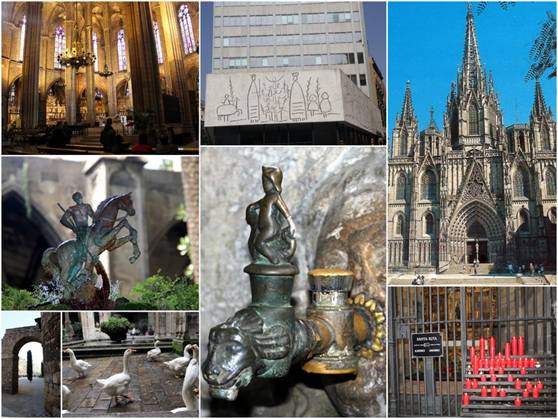 Here, Roman culture, represented by the remains of the walls and the aqueduct, coexists with the Gothic-style architecture of the cathedral and more modern styles represented by the Picasso-designed friezes on the façade of the Colegio de Arquitectos de Cataluña.

After viewing and photographing the façade of the cathedral, enter Calle del Bisbe and then turn into the first street on the left, Calle Santa Llúcia. Facing us immediately is the Casa de l’Ardiaca, which you can enter to admire its cloistered courtyard with a fountain in the centre. Corpus Christi is celebrated here with the local “L’ou com balla” tradition, in which an empty egg is made to “dance” on a spout of water from the fountain, which is decorated with flowers and cherries.

One of the special features of the Renaissance façade of the building is the letterbox designed by the modernist architect Domènech i Montaner in 1902, which represents justice. 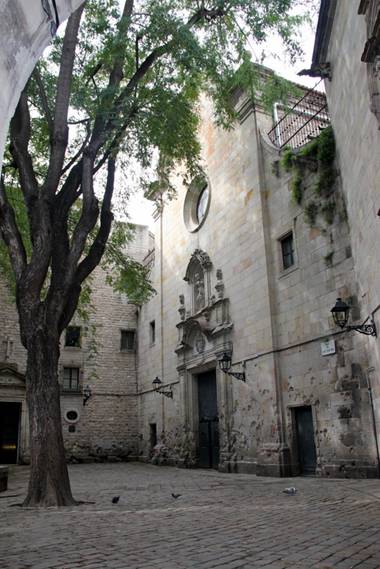 Return to Calle del Bisbe briefly before entering a small alley on the right, Calle Montjuich Bisbe, which leads to the secluded Plaza de San Felipe Neri, in which a Baroque church of the same name is located.

From here, via Calle San Severo, you reach Calle Bisbe, where you will see the entrance to the cathedral’s cloisters, which is well worth a visit. From the cloisters, you can enter the cathedral. An unusual sight in the interior garden area is the flock of 13 geese that placidly ambles around, seemingly unperturbed by the camera flashes of the many tourists who visit them. On one of the fountains, you can admire a beautiful sculpture of Sant Jordi, the patron saint of Catalonia, and the other is where the Corpus Christi “L’ou com balla” tradition takes place. 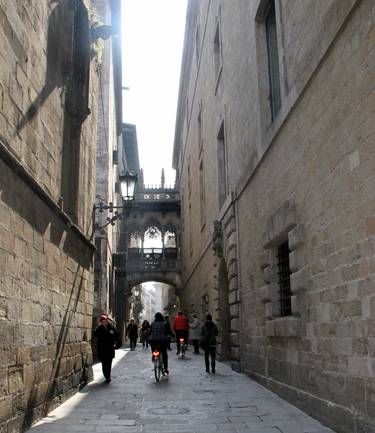 After visiting the cloisters, continue along Calle del Bisbe, under the Pont del Bisbe (Bishop’s Bridge), one of the most photographed places in Barcelona, until you came to Plaza de Sant Jaume, where Barcelona City Council and the Regional Government of Catalonia have their headquarters across from one another. 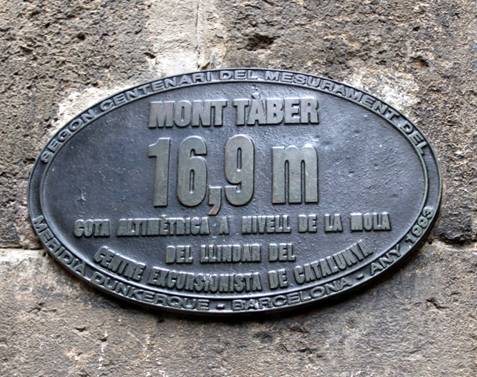 From the square, turn into Calle Paradis, which is where the first Roman settlement of ancient Barcino began to be built.

This area is situated on a slight hill, known as Mont Taber, which is 16.9 m above sea level, as indicated by a plaque on the façade of the Centro Excursionista de Barcelona (Barcelona Ramblers Centre), inside which you can see the columns of the ancient Roman temple dedicated to Augustus. Continue along until you reach the Bajada de Santa Clara, which takes you to the Plaza del Rey. This area is considered the noblest part of old Barcelona. In the square stands the Palacio Real Mayor (Grand Royal Palace), which was initially the residence of the Counts of Barcelona and later that of the Monarchs of the Crown of Aragon. It consists of St. Agatha’s Chapel, Lloctinent Palace and the Salón del Tinell, where it is said that the Catholic Monarchs met Christopher Columbus after he returned from his first voyage to America in 1493. 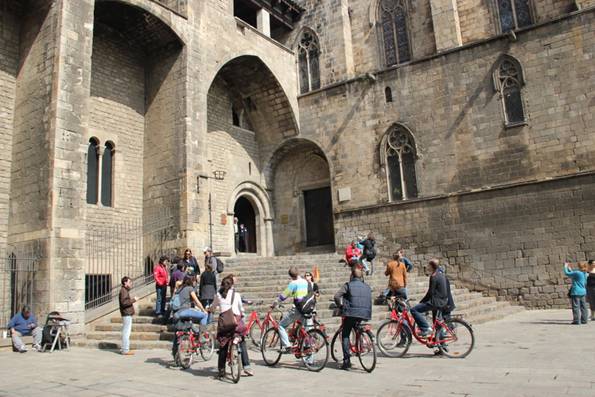 Continue along Calle Veguer until you reach Calle de la Llibreteria and cross the Plaza de Sant Jaume again. Then, enter Calle del Call and take the first street on the right, continue down the narrow Calle de Sant Domenech del Call, which leads to the old Call, or the Jewish quarter. Turn left into Calle Marlet, the location of the remains of the ancient medieval Roman synagogue, continue along Calle del Arco de San Ramón to return to Calle del Call and continue along this street, the centre of the old Jewish Quarter, until you reach Calle Raurich. 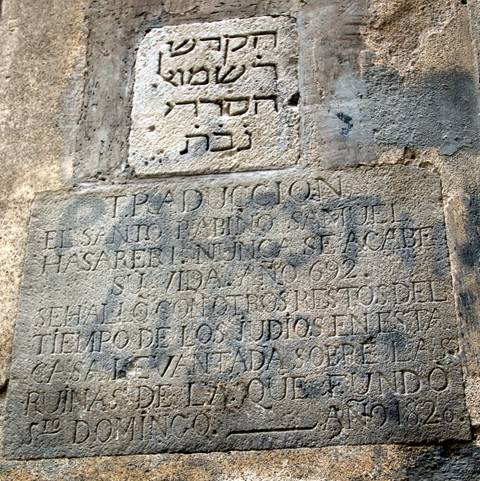 Pass by the traditional shop, “El Ingenio”, which dates back to 1838, until you reach the pedestrian street, Calle Ferran. This street, which joins the Plaza de Sant Jaume with Las Ramblas, was one of the main arteries of Barcelona in the late nineteenth and early twentieth centuries. Follow this street towards Las Ramblas, having turned right, until you reach Calle del Vidre, and then the Plaza Real, passing by the “Herboristería del Rey”, one of the oldest shops in the city, dating back to 1823. 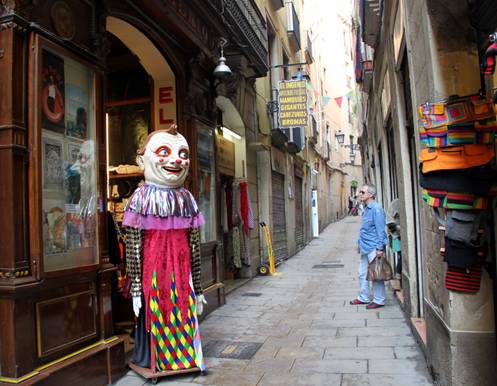 The Plaza Real, one of the most visited squares in the Gothic Quarter, is home, under its porticos, to numerous restaurants and bars with open-air tables, where people can eat, drink and have tapas and take advantage of the sunshine. Indeed, the orientation of the sun determines how busy a bar terrace is at different times of the day. In the centre of the square is the Fountain of the Three Graces, shaded by the towering palm trees that adorn the square. The street lamps in the square were designed by Gaudí.

Leave the square via Calle Colón and return to Las Ramblas and the starting point of the walking tour in Plaza de Cataluña.

On the return, time permitting, we recommend a brief visit to the Boquería Market located on the left of Las Ramblas. Here, the produce on display and the explosion of colours will delight the tired walker.