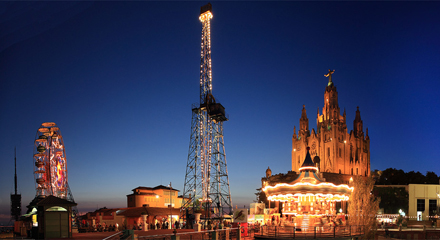 If you visit Barcelona, particularly if you are travelling with your children, you must visit Tibidabo, one of the world’s oldest amusement parks, located on the highest peak of the Collserola hills, next to the Expiatory Church of the Sacred Heart.

Officially opened on 29th October 1901, Tibidabo Amusement Park is one of the most characteristic spots in Barcelona, as well as one of the places that Barcelonans love the most. Locals often go up the hill to enjoy the rides or to gaze out at the stunning panoramic views of the city that go all the way down to the sea. Woody Allen chose a number of its sites for filming scenes from the film “Vicky Cristina Barcelona” which garnered an Oscar for actress Penélope Cruz. 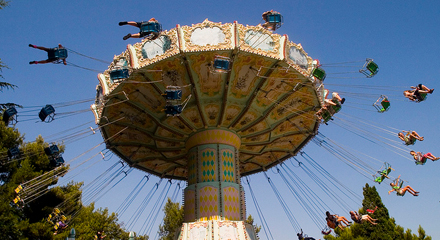 Today the park has over 25 rides for all ages, special activities and performers who wander the streets, putting on shows you can enjoy between rides. There is also a range of restaurants, picnic areas, souvenir shops and other services.

Historical rides include the “Atalaya”, a fabulous 50m-high metal construction with impressive views over the city, standing 551m above sea level; the “Automata Museum”, a collection of automatons and automatic machines including “the Mandolin Clown” and “La Moños”, which Walt Disney unsuccessfully tried to buy in 1954, and “The Plane”, a replica of the first aircraft to fly the Barcelona-Madrid route, which spins on an axis and affords riders a 360° view of Tibidabo hill, also known as “the Magic Mountain”. 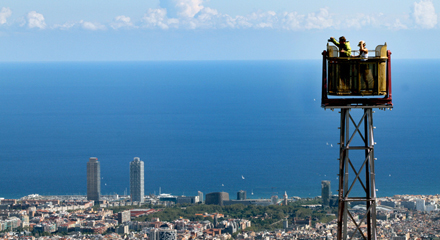 The park can be easily reached by car, taxi or bus. However, we suggest you take the Tramvia Blau and Tibidabo Funicular Railway, two historical modes of transport that guarantee visitors a unique experience.

Although most rides must be paid for, there are a number of areas open to the public, such as the picnic areas and the lookouts, where you can enjoy the best views of the city. 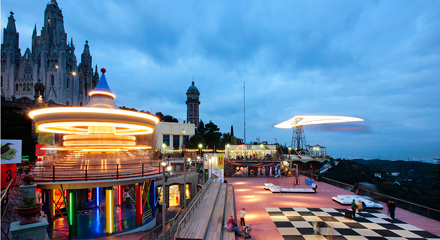 For opening times and prices Visit the Tibidabo website.