Home “The great wave of Kanagawa” and Hotel España

“The great wave of Kanagawa” and Hotel España 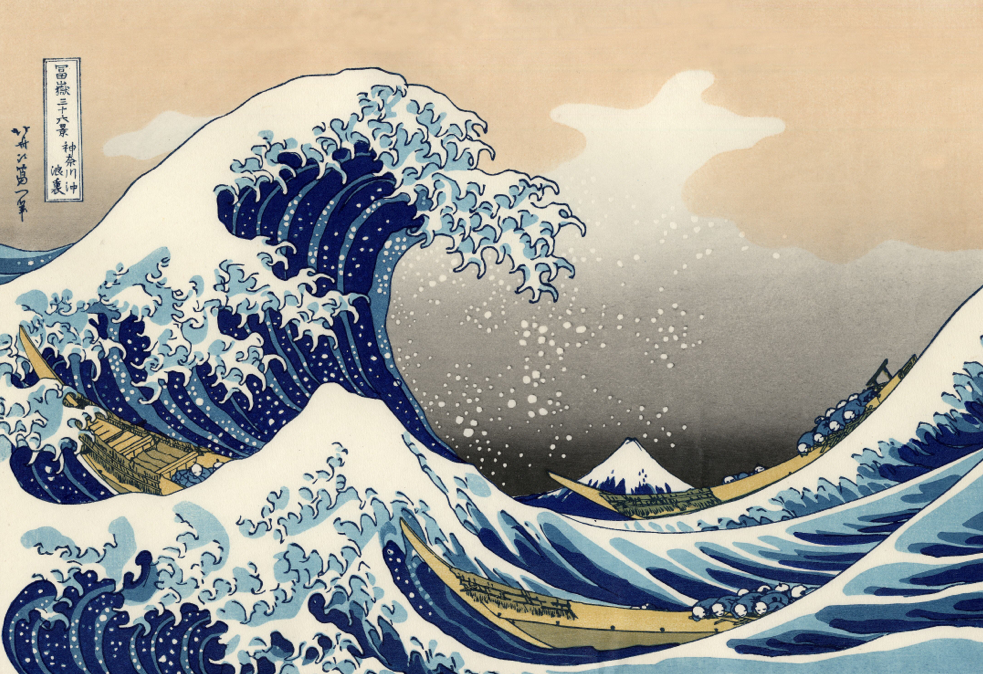 Very few people know the story that connects Hotel España in Barcelona and the Japanese artist Katsushika Hokusai (1760-1849), creator of the most famous reproduced wave in the history of art: “The great wave off Kanagawa”.

Recognised as one of the masterpieces of ukiyo-e style (“pictures of the floating world”) and inspiring “Japonism”, a cultural and artistic trend that invaded Europe in the second half of the 19th century, “The great wave off Kanagawa” served as inspiration to Ramon Casas, when it came to decorating the walls of the “Salón de las Sirenas” in Hotel España.

When, at the beginning of the 20th century, the architect Lluís Domènech i Montaner began work to renovate the hotel, he entrusted the painter Ramon Casas with the task of decorating the dining room. Casas, who, together with artist and writer Santiago Rusiñol, was one of the main introducers of Modernism into Catalonia, covered this room’s wall with a spectacular recreation of a seabed halfway between reality and fantasy, inhabited by mermaids, Mediterranean fish, crustaceans and cephalopods, on a background of light colours and embossed waves. 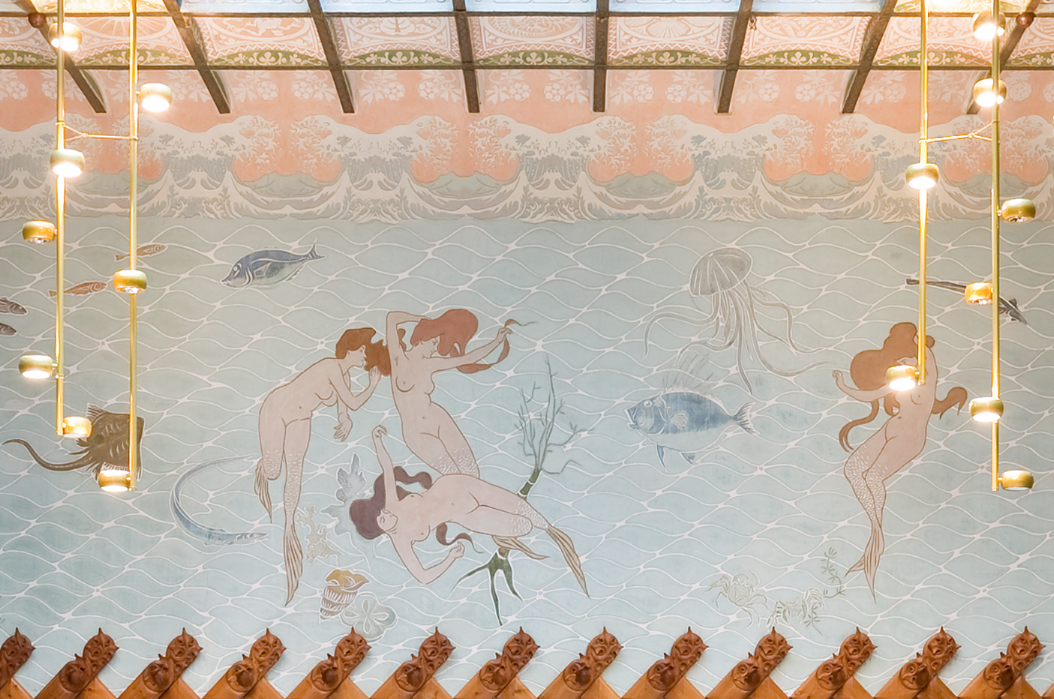 A lover of “Japonism”, a movement he discovered during his frequent trips to Paris, Casas designed on the top section of the wall, in the area corresponding to the sea’s surface, a border of waves in the style of the great wave by Hokusai, crowning one of the greatest Modernism paintings. The room’s large skylight roof gave it a magical and enveloping atmosphere, making the room a sort of large tank, earning it this nickname for many years.

After the hotel’s renovation was completed in 2011, the “Salón de las Sirenas” regained all its glory, reinforced by the placing of lamps simulating the gurgling bubbles along the “Patio de las Monjas”, attached to the room. 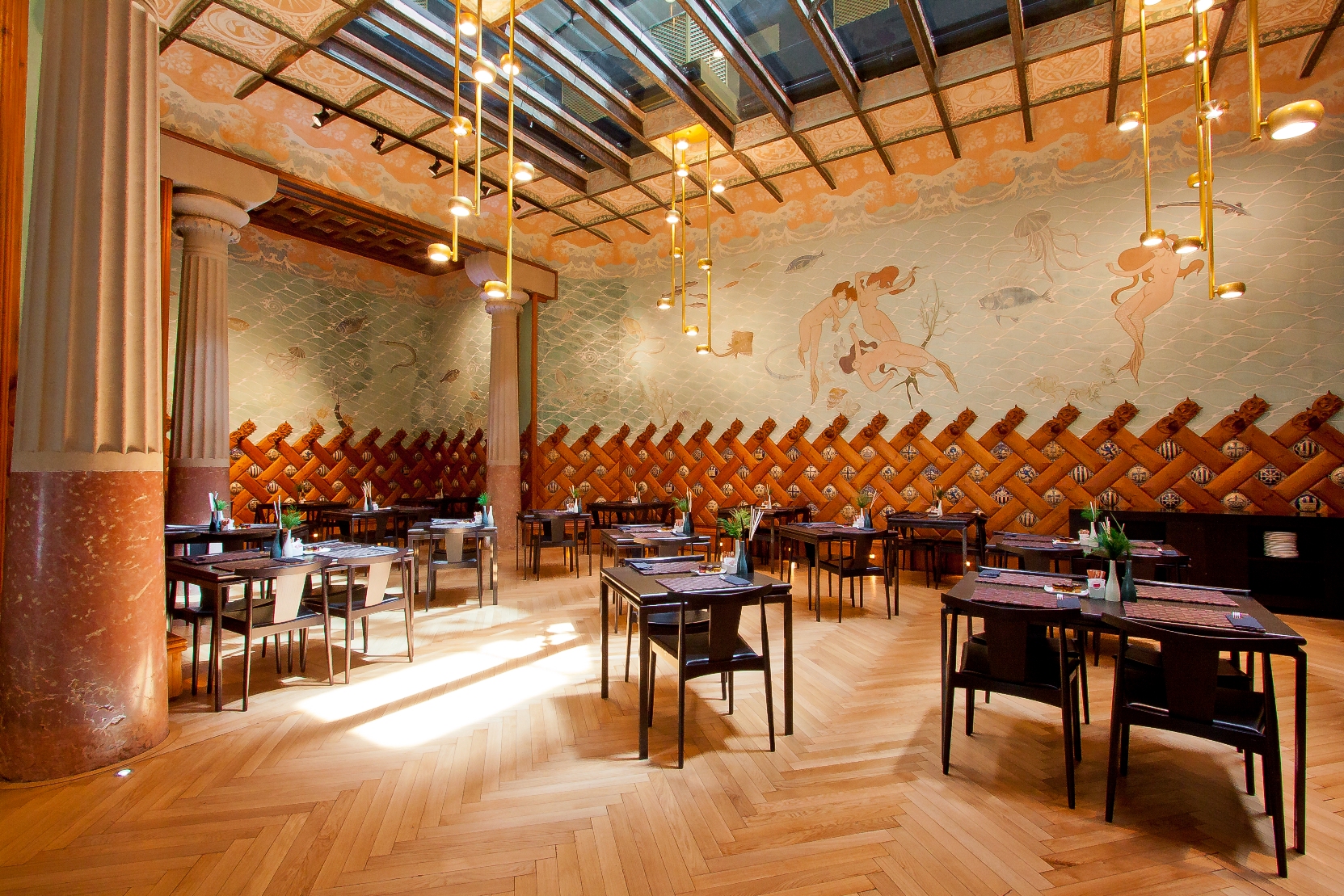 Considered to be a jewel in the crown of Modernist Catalonia, Hotel España originally opened its doors in 1859 under the name Fonda de España, later to be renovated by the famous Modernist architect Lluís Domènech i Montaner, the designer of other great Modernist works, such as the Palau de la Música, Hospital de Sant Pau and Casa Lleó i Morera, with the collaboration of Eusebi Arnau and Ramon Casas.

The restoration project that the hotel underwent in 2010 has brought back the spirit conceived by Domènech i Montaner. The Modernist spaces have been refurbished to their original design and, at the same time, the hotel has been equipped with the latest technology, design and comfort.