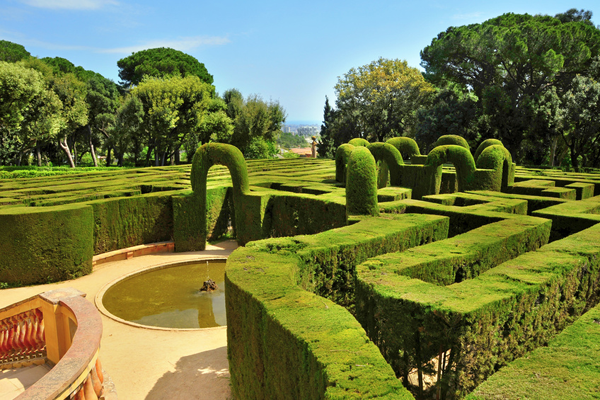 Without its parks and gardens, Barcelona wouldn’t be able to breathe. They’re the green lungs of the city and an open door to nature in amongst the traffic and the hustle and bustle. But they’re not just important for their positive environmental effect, they’re also places where you can go for a leisurely stroll, participate in numerous cultural and sporting activities or enjoy a space where you can interact with others. Barcelona has an extensive network of parks and gardens that has grown exponentially, especially as a result of the large-scale urban redevelopment projects of the late twentieth and early twenty-first centuries.

Out of all of these green spaces, there are some that deserve special attention because they blend beauty, culture, art and the history of Barcelona. Today, why not explore Park Güell, a modernist work of art designed by the city’s most famous architect, Antoni Gaudí? Or you could take a boat out onto the lake in the Parc de la Ciutadella or go on a trip to the enormous Parc de Montjuïc. There’s also the possibility of losing yourself in the garden of the Laberint d’Horta, the oldest maze in the city, or find a moment of peace and quiet in Turó Park. We hope you enjoy your walk.

PARK GÜELL | web
The best of modernist architecture and the most impressive views of Barcelona in the midst of nature. You’ll find all of this in Park Güell, an area created by Antoni Gaudí which is now a symbol of the city. Gaudí designed it at the creative peak of his career. Aristocrat Eusebi Güell commissioned him to build a garden city with homes and communal spaces like a market and a chapel. The project was discontinued in 1914 but luckily some of the wonders had already been built and remain standing, such as Sala Hipòstila, a covered square that showcases Gaudí’s most genuine style, or the famous dragon covered in coloured ceramic pieces that dominates the entrance. It was declared a UNESCO World Heritage Site in 1984 and is now the most visited park in the city.

PARC DE LA CIUTADELLA | web
Parc de la Ciutadella is located next to Barcelona Zoo and very close to the Arc de Triomf. It is named after the military citadel built by Felipe V after he conquered the city in 1714. A century and a half later, it became a public park. Today, Parc de la Ciutadella is a lively place where you can take a boat out onto the lake, enjoy the sun or stroll along its wonderful tree-lined paths. It is an open-air museum that houses beautiful sculptures, such as a life-size stone mammoth and El Desconsol, a female nude by the Catalan sculptor Josep Llimona, situated in front of the Catalan Parliament building. The Castell dels Tres Dragons, by the architect Domenech i Montaner, and Umbracle, a greenhouse designed by Josep Fontseré, are fabulous examples of Catalan modernism.

PARC DE MONTJUïC | web
The enormous Parc de Montjuïc occupies a hill that overlooks the harbour and the city. One of its iconic symbols is the Castell de Montjuïc, a fortress built in 1751 from which the city was bombarded on several occasions. Some buildings from the 1929 Barcelona International Exposition still remain, such as the Museu Nacional d’Art de Catalunya, which houses 1,000 years-worth of Catalan art. And the 1992 Olympic Games left a legacy of sports facilities, including the Estadi Lluís Companys and the Palau Sant Jordi. In the Botanic Garden, you’ll find species of plants and trees from around the world. And make sure you don’t miss the Font Màgica’s light and water shows or museums such as the Fundació Miró and CaixaForum, located in the former Casaramona textile factory, a modernist work by Josep Puig i Cadafalch.

PARC DE LABERINT D’HORTA | web
This beautiful park, located at the foot of the Collserola mountain, is the oldest garden in Barcelona. The Parc del Laberint d’Horta takes its name from its fabulous maze, formed from trimmed cypress trees. It was designed in 1792 by the Italian engineer, Domenico Bagutti, under the initiative of the Marquis de Llupià i d’Alfarràs. The space was greatly improved with the expansion carried out by the architect Elies Rogent, in which a romantic garden was added with flower beds, small squares, large trees and even a waterfall. Another highlight of the park is the Torre Soberana, an old country house dating back to the fourteenth century, which was renovated and redecorated in an arabesque style during the nineteenth century.

TURÓ PARK | web
With its lake surrounded by poplar and banana trees and its large grassy expanse, this park is an ideal place to enjoy a moment of peace and quiet in the middle of the city. Since its creation in the early twentieth century, Turó Park has been one of Barcelona’s most iconic parks. It takes its name from an old amusement park that was located on the site between 1912 and 1929. When it closed, the central part of the land became a green area and homes were built around it. The sculptures are an important aspect of the park, the most notable of which is the one by Apel·les Fenosa, dedicated to the Catalan composer Pau Casals. If you want to take a break, you can stop for a refreshment at the snack bar located in the small theatre square where, decades ago, open-air performances used to be held.