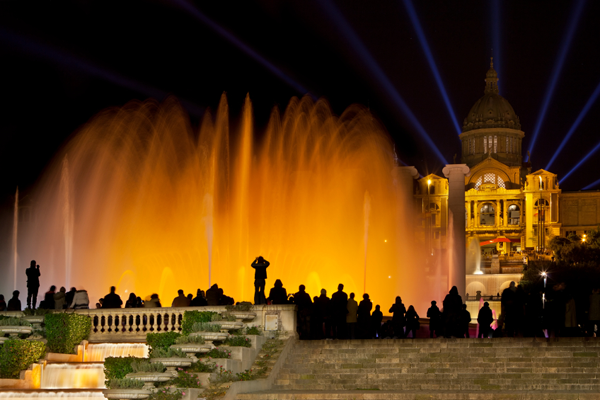 Few steps away from Plaza Espanya and at the foot of Montjuïc. At that point in Barcelona an explosion of water, light and music often occurs. It is the Magic Fountain in full swing – a show that you cannot miss.

This is the main fountain of a series of waterfalls and ponds that are found along Avenida Maria Cristina. A monument designed by architect Carles Buïgas for the Universal Exhibition of 1929. It was built in a race against time to make sure it was ready for this event. In less than a year more than 3,000 workers managed to finish the Magic Fountain.

Classical music, movie soundtracks, remixes of the 80s and 90s or the latest hits on the music scene. Throughout the year thousands of sessions are scheduled and numerous water jets of the fountain dance to the most varied melodies. All of them are synchronized with multiple water and lighting plays, thus generating seven billion different choreographies.

This colorful show has reached fame with time and, now, with some 2.5 million visitors a year, it is one of Barcelona’s icons and one of the most visited monuments in Europe.

But the magic of the most famous ornamental fountain in Barcelona has its tricks, and the curious among you shall have the option to discover them. Make a reservation to be able to visit the fountain inside and go back in time. In this area, you can still see the 1929 engine rooms, where the fountain operation has been manually controlled for decades.

Now, choreographies are monitored via software and automatically programmed from a control cabin. However, the fountain keeps some of its original mechanisms intact, such as large prisms with glass in 5 different colors. These are located just below the fountain jets and are rotated according to the color you want to project on the water.

The Magic Fountain is supplied with groundwater from the Montjuïc mountain, and its clever recirculation system reuses the 2,600 liters of water emanating from it every second, when in full operation.

Recently, its sound system has been improved and LED lights have been incorporated into the cascades of Avenida Maria Cristina to make it even more colorful and consume less energy. The fountain has adapted to changing times, but it still preserves one thing you cannot explain and that, in order to understand it, you will have to see with your own eyes, i.e. its magic.