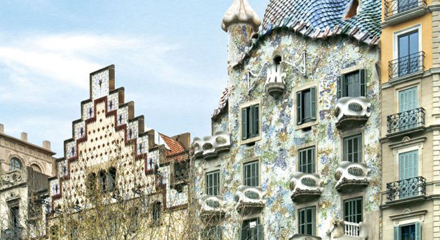 Today’s route will cover one of the most important streets in Barcelona, the Passeig de Gràcia. We will discover what, until 1827, had been a road called Camí de Jesús, which joined the city of Barcelona with the neighbouring town of Gràcia. However, by the start of the 19th century, the people of Barcelona were being stifled inside the city walls, and this led to the development of nearby towns, including Gràcia, Sant Gervasi and Sants.

With the demolition of the walls in 1854 and the start of the Eixample five years later, following the design by Ildefons Cerdà, the Passeig de Gràcia, became hugely important. Initially single family homes with gardens were built there, and coffee shops, theatres, restaurants and dance halls sprang up, making it the preferred leisure area for the bourgeoisie.

Later on, after the 1888 World Fair was held in the ‘Ciudad Condal’ (as Barcelona is sometimes called), these homes were replaced by four-storey buildings with shops on the ground floors. Slowly but surely, the bourgeoisie began to move into this street, and competed to employ the most famous architects to build or remodel the buildings that contained their flats, which were usually on the lower floors. The ground floors of the new buildings housed pharmacies, cinemas, restaurants, stores and grocer’s shops.

That is why we can now admire examples of the Modernist style that dominated the buildings along Passeig de Gràcia at the time; these buildings were designed by Gaudí, Domenech i Montaner, Puig i Cadafalch, Josep Vilaseca i Casanovas and many other architects from the period.

Today, Passeig de Gràcia continues to be one of the most, if not the most important, avenues in Barcelona. The Modernist buildings have been restored and the ground floors boast restaurants, coffee shops, jewellery stores and leading fashion houses including Louis Vuitton, Loewe, Armani, Cartier, Gucci and Yves Saint Laurent.

And now, after this brief introduction, we will begin our route. From Plaça de Catalunya, we will walk up the left-hand side of the street with the odd building numbers.

No 21 – Here we find the monumentalist Unión y el Fénix building, built between 1927 and 1931 by the architect Eusebi Bona Puig and the sculptor Frederic Marés. This building is distinguished by its magnificent ornamental dome adorned with a phoenix at the top.

No 27 – Palau Malagrida, is a beautiful modernist building built between 1905 and 1908 by the architect Joaquím Codina for the tobacco industrialist Manuel Malagrida.

The block on this side of Passeig de Gràcia between carrers Consell de Cent and Aragó is known as “The block of discordance”, a name that comes from the fact that it contains different works by three of the leading modernism architects, Gaudí, Puig i Cadafalch and Domenech i Montaner. All three are just as famous, but they had very different styles. These buildings form the most important modernist group in the city.

No 35 – Casa Lleo Morera, the work of the architect Lluis Domènech i Montaner, was a refurbishment of the old Rocamora house. Carried out between 1902 and 1906, the building won the first annual artistic buildings competition organised by Barcelona City Council. Crowned by an ornamental shrine, this floral modernist work suffered significant damage during the Spanish Civil War and later on too, when work was done to install commercial premises on the ground floor. A lot of work was needed to restore it to its current state. Although its original aspect has been recovered, the magnificent sculptures by Eusebi Arnau which adorned the ground floor windows have been lost. The building still contains private flats, so it cannot be visited.

No 37 – Casa Mulleras, by Luis Sagnier i Vilavechia, is built in an eclectic style. This architect designed several buildings in Barcelona, including the Temple del Tibidabo and the headquarters of the Caja de Pensiones savings bank.

No 39 – Building constructed in 1915 by the architect Marceli Coquillat for Josefina Bonet.

No 41 – Casa Amatller: this building, constructed between 1898 and 1900, was declared an artistic historical monument in 1976. This work was commissioned by the Catalan chocolate maker Antonio Amatller to the architect Puig i Cadafalch. Modernist in style, it is a blend of Catalan and Flemish Gothic.

Today you can visit the building’s vestibule, where there are two staircases, as was the custom at the time – one to the main floor and the other to the homes of the other residents. It is well worth admiring the ornamental elements here. At the end we can visit the Amatller store, where you can not only purchase objects related to the house and to modernism, and where an interesting exhibition is usually being held, but where there is also an Information Office on modernism.

No 43 – Casta Batlló, is the work of the architect Antoni Gaudí. This building was a remodelling of a previous work by Emili Sala. Gaudí’s work focused mainly on the façade; the first floor, where the Batlló family lived; the flat roof and the building well. Casa Batlló was included on the Unesco World Heritage List in 2005. This house is open to the public.

We continue up the street. If you’ve looked, you may have noticed a number of benches with street lamps; there are 32 in total. They are the work of the architect Pere Falqués i Urpi, and were designed in 1906. The benches are made from trencadís (a type of mosaic formed of small pieces of ceramic stuck together with mortar), and the street lamps are made of forged iron. The two elements form a single piece.

Later on, in 1974, benches with flowerbeds were built on the corners of Passeig de Gràcia, imitating the Falqués ones.

No 53 – Here is an entrance to Bulevard Rosa, a shopping centre with over 100 stores selling the latest fashions and a selection of quality items. The plot this building is built on used to be the Salón Rosa, a well-known coffee shop for the Barcelona bourgeois, and the Publi cinema, the first movie theatre to hold matinee sessions. The cinema was located at No 55, where the Nespresso store is today.

No 75 – Today, Casa Enric Batlló, is home to the Hotel Condes de Barcelona and is the work of the architect Josep Vilaseca i Casanovas, built between 1895 and 1896. The combination of different materials, such as exposed brick, stone, ceramics and forged iron, makes this façade special.

Continuing on our route, we will pass by establishments including Boss and Carolina Herrera and the entrance to Passatge de la Concepció on the left, until we reach Palau Robert, in No 107. This building was the home of the aristocrat Robert Robert i Suris, and the work of French architect Henry Grandpierre. Today, it houses an Information Office, where you can enquire about other routes around the city or around Catalonia. The former gardens of the Palau Robert are now open to the public. They are a cool and pleasant place to sit and get your strength back.

Opposite the entrance to the garden on carrer de Còrsega is a lovely fountain built by Josep Campeny in 1912, called “La font de la granota”, or ‘the Frog Fountain’. Crossing La Diagonal we come to the “Jardins de Salvador Espriu”, known as “Els Jardinets”.

No 113 – Casa Bonaventura Ferrer, is by the architect Pere Falqués i Urpí. Of note on the three-sectioned façade is the gallery with a sculpture carved from stone.

No 115 – This building from 1901 belonged to the Bertrand family and today, it is divided into tourist apartments.

No 129 – This is the last building on Passeig de Gràcia and is where the neighbourhood of Gràcia begins, which, as you have already heard, was formerly an independent municipality.