Home A mouthful of history: salmorejo

A mouthful of history: salmorejo 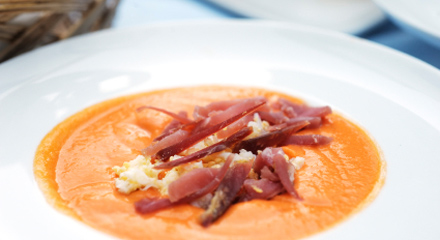 When people think of Cordoba, they inevitably think of salmorejo. It is a dish which has borne witness to the entire history of the Iberian Peninsula and which had to be included on Fonda España’s Summer Menu.

Eaten as a cold soup, or a sauce to accompany other dishes, it is made from ingredients that are as basic and Spanish as garlic, bread, olive oil, a little vinegar and salt. It is linked to a historic fact, which saw the dish change its colour: from white to red.

That final addition to the historic Cordobes recipe first reached the Peninsula in the fifteenth century from America, but did not become popular in local dishes until the eighteenth century. That ingredient was no more and no less than the humble tomato, the star ingredient of other Andalusian cold soups, like the popular gazpacho.

For some, salmorejo is a variant of gazpacho but, for others, it is a unique dish in its own right. What is certain is that they are two outstanding soup  dishes with much in common but also with differences, mainly in texture. Cordobes salmorejo is known for being much thicker than gazpacho due to the amount of bread used in its preparation. And both can be eaten by themselves or as an accompaniment. At Fonda España, we serve it with brown crab, a delicious combination to satisfy the taste buds.

The preparation method has its roots in history. The idea of breaking down the ingredients dates back to the Neolithic Age and was evolved by Roman soldiers with dishes known as puls (soups with bread as the main ingredient), made in a mortarium (mortar), in which they prepared the moretum (bread, garlic and vinegar). It also has its roots in the most famous of Al-Andalus sauces: almorí (made from flour, salt and vinegar). The combination of these processes and preparation methods has culminated in what we know today as salmorejo.  A feast of acidic and salty flavours.

It is a cold soup with a thick texture that bears witness to all of the peoples who have inhabited the Iberian Peninsula and to thousands of years of culinary knowledge. A mouthful of history in the midst of the modernist gem that is Fonda España.