Home The Modernist Barcelona of Lluís Domènech i Montaner

The Modernist Barcelona of Lluís Domènech i Montaner 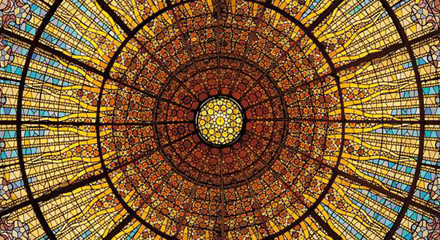 One of Barcelona’s most recognisable and characteristic architectural styles is, without doubt, Modernism – an artistic and cultural movement that had its heyday in the late nineteenth and early twentieth centuries, heralded by the Barcelona Universal Exposition of 1888. Architects of the likes of Antoni Gaudí, Josep Puig i Cadafalch, Lluís Domènech i Montaner and Josep Maria Jujol i Gibert constructed buildings of outstanding beauty, such as La Pedrera, the Palau de la Música and Casa Ametller, which now stand as great monuments of exceptional historical, artistic and cultural interest.

The long roll call of Modernist architects and artists includes the name of Lluís Domènech i Montaner (1850-1923), who created some of the most iconic buildings of “Catalonian Modernisme” and designed the renovation of the Hotel España. An architect and professor at the Barcelona School of Architecture, who had close links with the world of politics, Domènech i Montaner developed a particular style that combined structural rationality with outstanding decorative elements and was inspired by Hispano-Moorish architecture and Modernism’s characteristic curved lines. 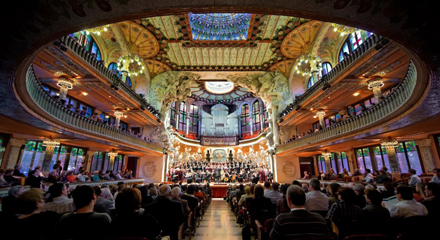 This majestic auditorium was commissioned by the Orfeó Catalá choral society and built by Domènech i Montaner between 1905 and 1908. For its decorative exuberance, it is considered to be one of the greatest architectural gems of Catalonian Modernism. Its Concert Hall, one of the most beautiful and unique in the world, has been staging major musical, artistic and social events for more than 100 years. Particularly outstanding is the main stage, presided over by a large organ and a central skylight that represents the sun and allows natural light to enter. Numerous figures, busts and decorative elements inspired by nature surround the stage and hall, making it a mystical and magical space. The Palau de la Música Catalana was named a World Heritage Site by UNESCO in 1997. 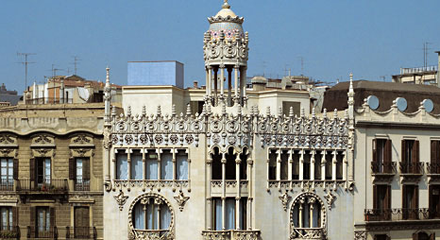 Located on the corner of Passeig de Gràcia and carrer Consell de Cent, Casa Lleó i Morera, along with Casa Batlló and Casa Ametller, forms part of what is known locally as the “Illa de la Discòrdia” (Block of Discord), because of the difference in styles of the three exceptional buildings. In 1905, the Lleó i Morera family commissioned Domènech i Montaner to completely renovate the property, which had been built in 1864. The architect contracted the best artists and craftsmen of the day, such as the sculptors Eusebi Arnau and Alfons Jujol, and the glassmakers Rigalt and Granell, and achieved a work of extraordinary beauty. Although it is not possible to visit the inside of the house, some of its furnishings are on display in the MNAC National Art Museum. 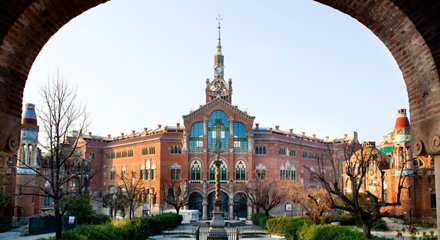 Popularly known as “Hospital de Sant Pau”, it consists of a main building and numerous adjacent blocks, and is one of the largest collections of Modernist buildings anywhere, along with the Institut Pere Mata in Reus, also the work of Domènech i Montaner. Work on its construction began in 1902, for which the architect enlisted the services of his son, Pere Domènech i Rovira, who was responsible for managing the second phase of the project, and the sculptor Pau Gargallo, who created the famous sculptures on the façade of the main building. The hospital’s most characteristic features are its exposed brickwork and  blend of different architectural styles. It was declared a World Heritage Site by UNESCO in 1997. 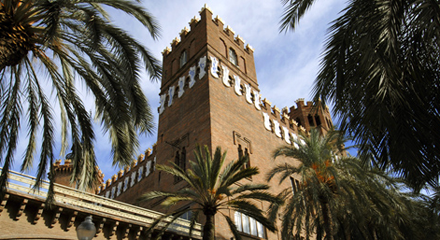 Located at the end of Passeig de Lluís Companys, on one of the edges of Parc de la Ciutadella, this imposing square building, featuring turrets and battlements, was designed as a café-restaurant for the Universal Exposition of 1888. After the event, the “Castell dels Tres Dragons” (Castle of the Three Dragons), named after the novel of the same name by Serafí Pitarra, had various uses associated with the world of zoology before becoming the current Laboratory of Nature. It was constructed in brick and sheet iron and is considered to be one of the finest of all Modernist buildings. 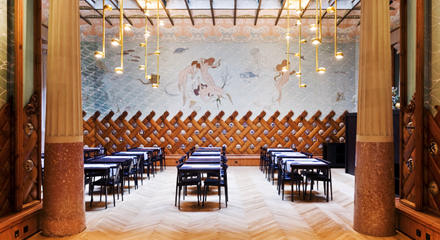 The Hotel España opened its doors in the heart of Barcelona’s historic centre in 1859 and was originally called Fonda de España. At the turn of the twentieth century, the family that owned the hotel commissioned Domènech i Montaner to renovate the building, which he did with the collaboration most notably of the sculptor Eusebi Arnau, creator of the splendid alabaster fireplace that dominates the hotel’s bar, and the painter Ramon Casas, who painted the famous two-tailed mermaids that give one of the dining rooms its name. The work earned the praise of Barcelona City Council and, in 1904, the hotel was awarded the Diploma of Honour for “best artistically and ornamentally decorated establishment.” More recently, the hotel has undergone further alterations that have seen it retain the style and spirit bestowed upon it by Domènech i Montaner.